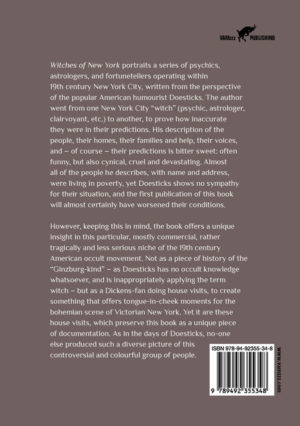 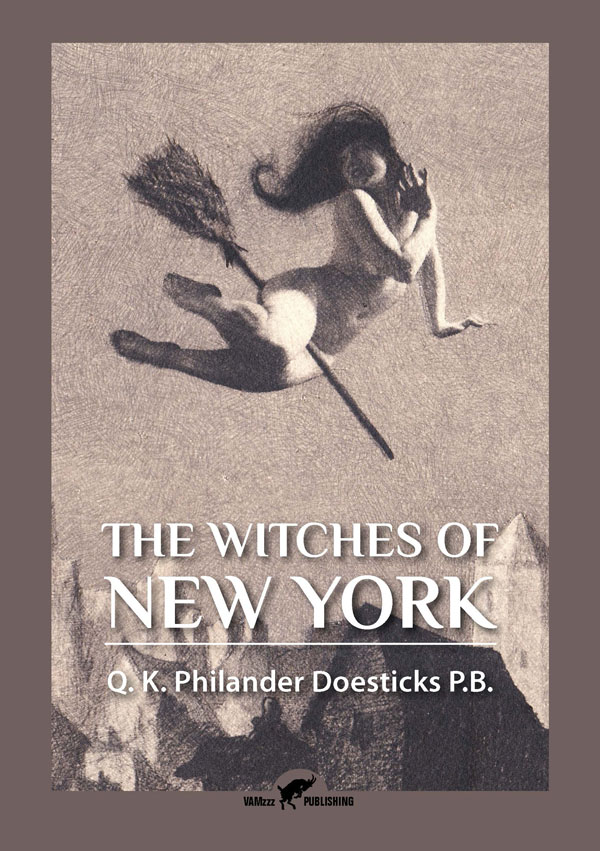 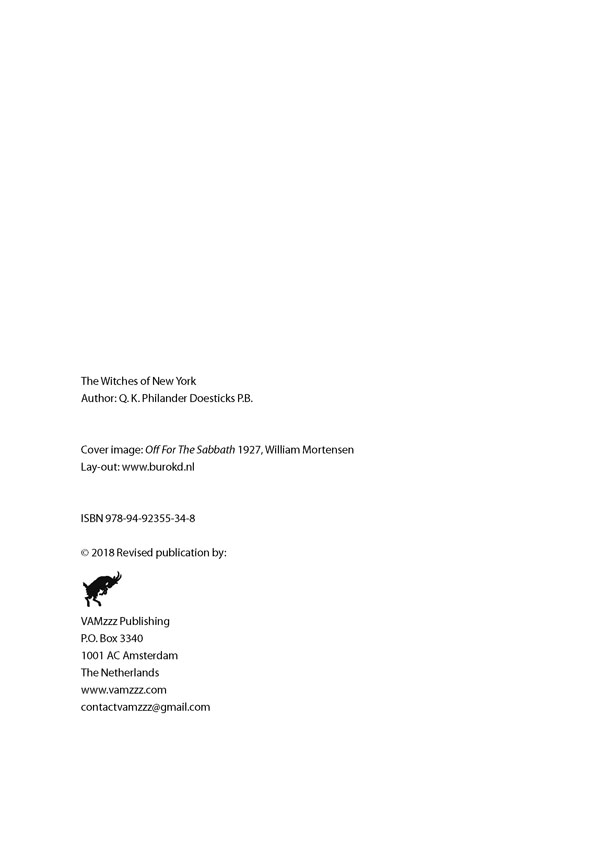 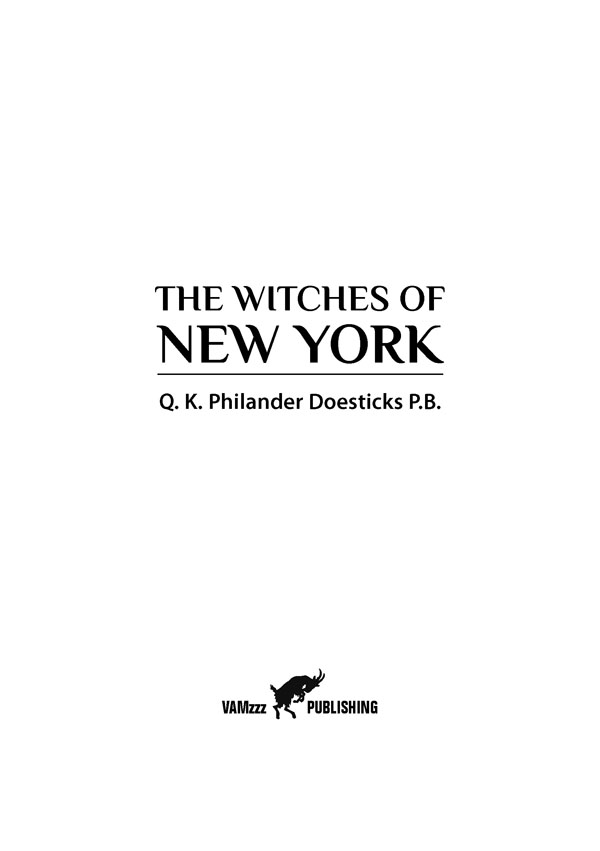 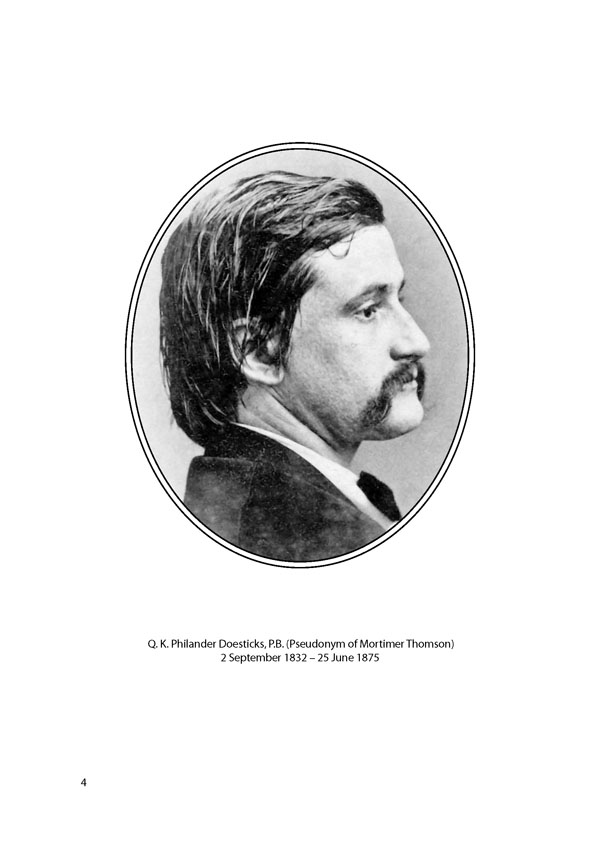 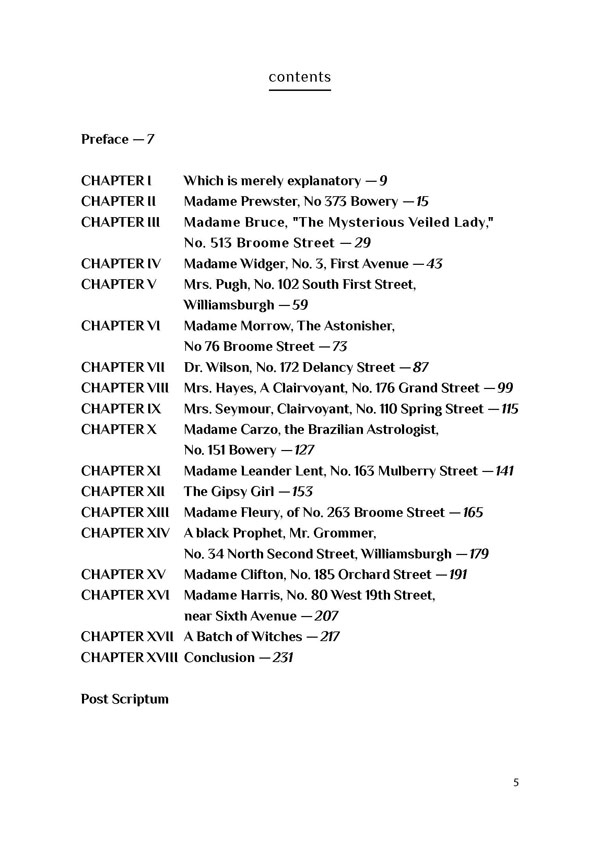 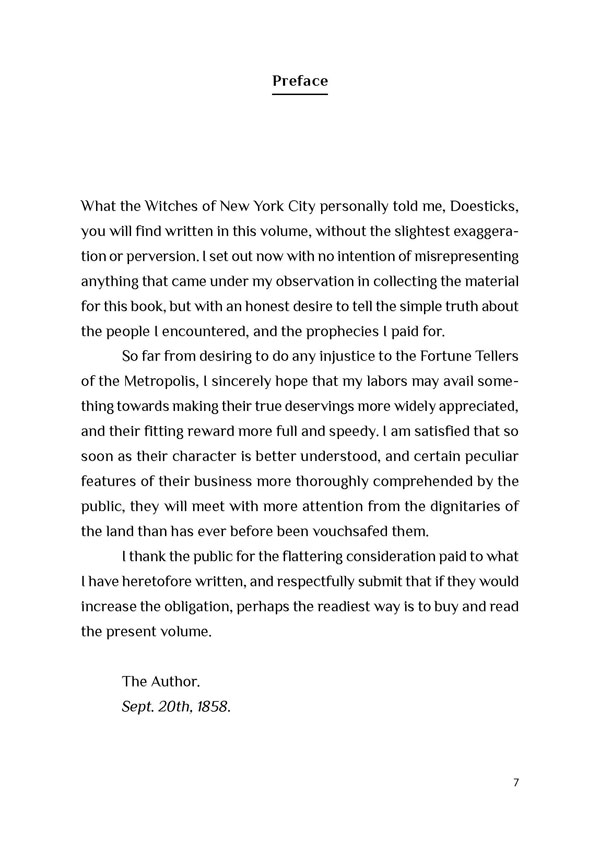 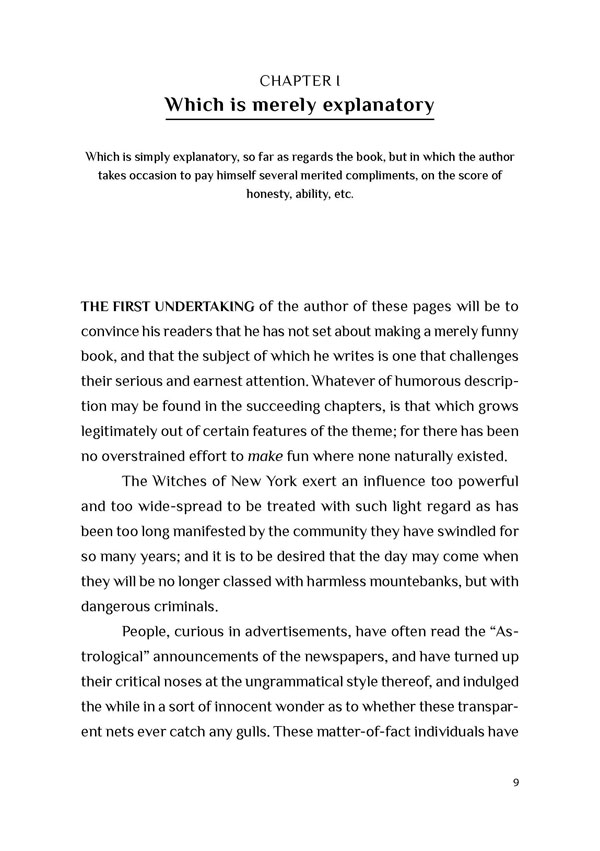 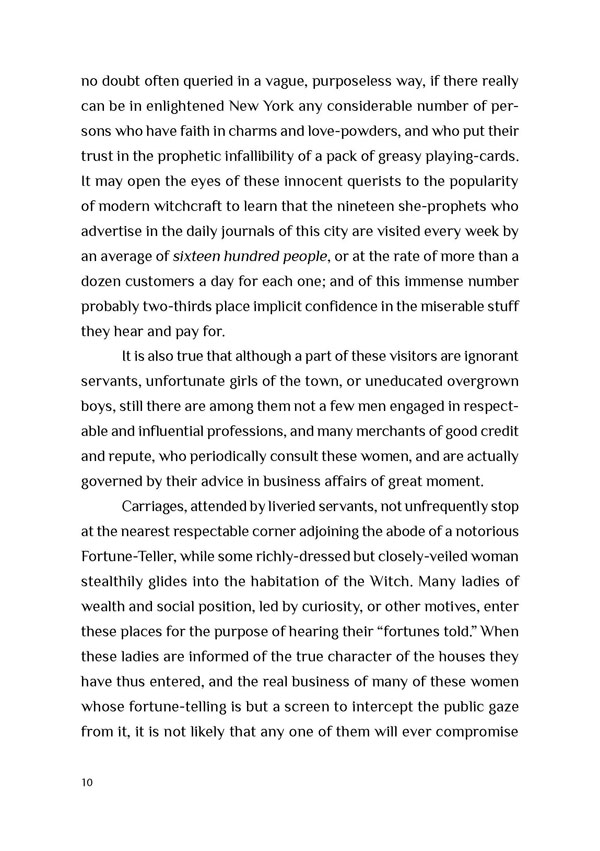 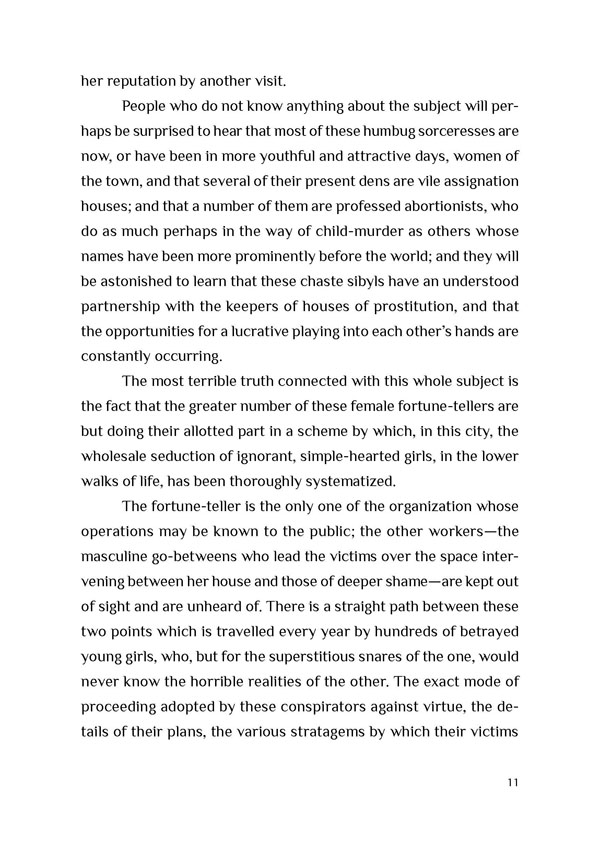 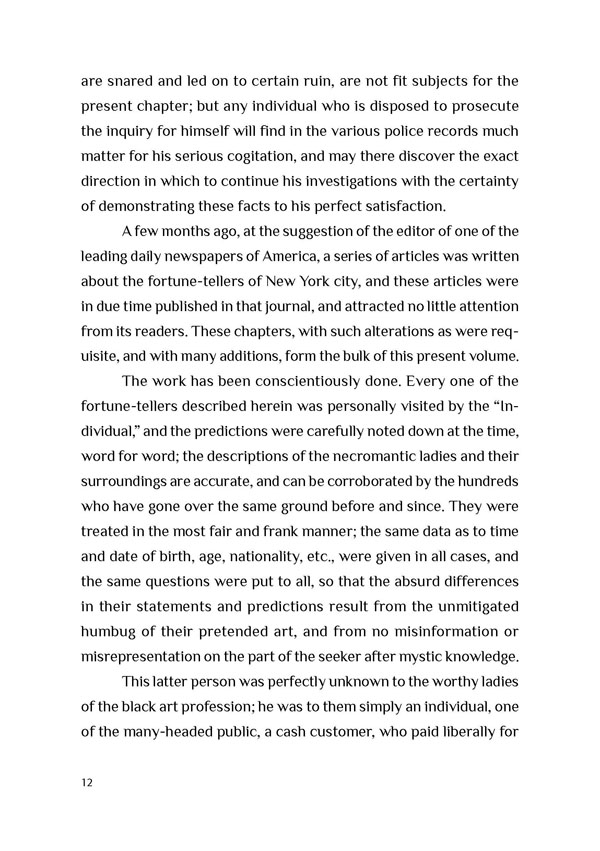 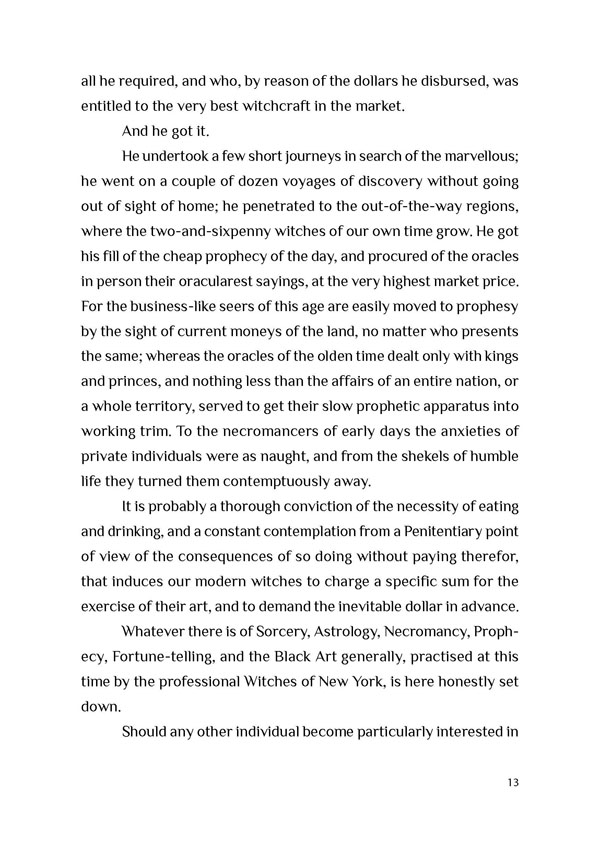 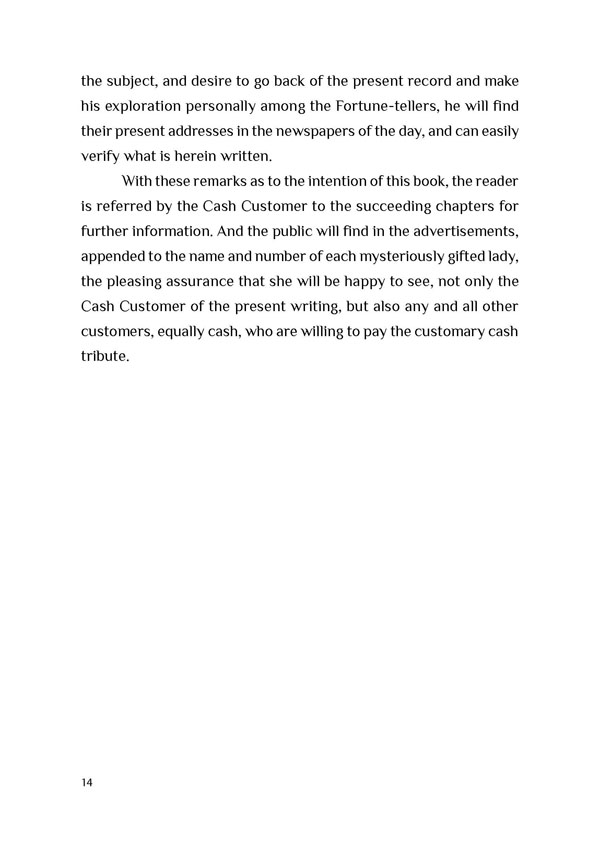 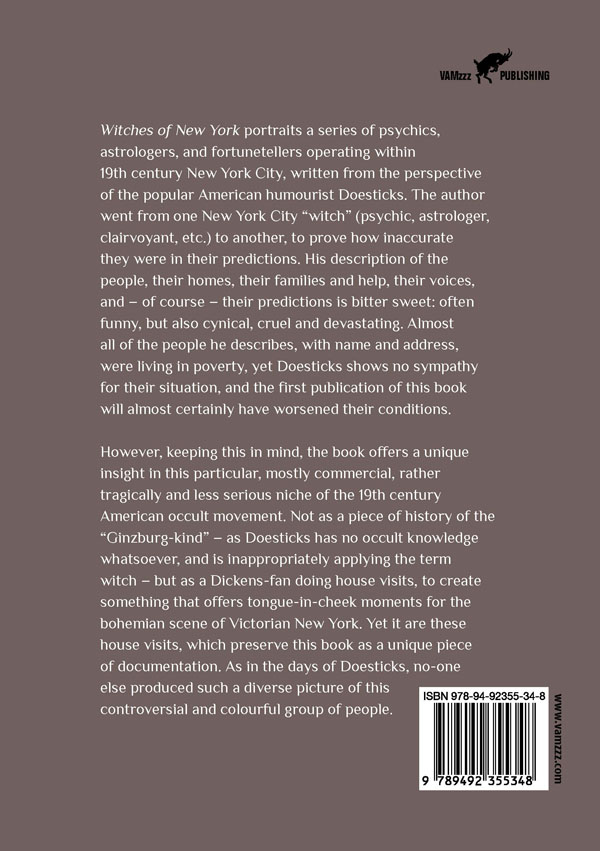 The Witches of New York portraits a series of psychics, astrologers, and fortunetellers operating within 19th century New York City, written from the perspective of the popular American humourist Doesticks. The author went from one New York City “witch” (psychic, astrologer, clairvoyant, etc.) to another, to prove how inaccurate they were in their predictions.

The Witches of New York portraits a series of psychics, astrologers, and fortunetellers operating within 19th century New York City, written from the perspective of the popular American humorist Doesticks. The author went from one New York City “witch” (psychic, astrologer, clairvoyant, etc.) to another, to prove how inaccurate they were in their predictions. His description of the people, their homes, their families and help, their voices, and – of course – their predictions is bitter sweet: often funny, but also cynical, cruel and devastating. Almost all of the people he describes, with name and address, were living in poverty, yet Doesticks shows no sympathy for their situation, and the first publication of this book will almost certainly have worsened their conditions.

However, keeping this in mind, The Witches of New York offers a unique insight in this particular, mostly commercial, rather tragically and less serious niche of the 19th century American occult movement. Not as a piece of history of the “Ginzburg-kind” – as Doesticks has no occult knowledge whatsoever, and is inappropriately applying the term witch – but as a Dickens-fan doing house visits, to create something that offers tongue-in-cheek moments for the bohemian scene of Victorian New York. Yet it are these house visits, which preserve this book as a unique piece of documentation. As in the days of Doesticks, no-one else produced such a diverse picture of this controversial and colourful group of people.

Q. K. Philander Doesticks was a pseudonym of  Mortimer Q. Thomson (September 2, 1832 – June 25, 1875), an American journalist and humorist. He was born in Riga, New York and grew up in Ann Arbor, Michigan. He attended Michigan University in Ann Arbor, but was expelled along with several others either for his involvement in secret societies or for “too much enterprise in securing subjects for the dissecting room.” After a brief period working in theater, he became a journalist and lecturer.

See also: Emotions in the History of Witchcraft

Born in Riga NY, September 2 1832, Mortimer Thomson was a humourist, essayist, journalist, lecturer and war correspondent, who wrote under the name Q. K. Philander Doesticks P.B., which stood for Queer Kritter Philander Doesticks Perfect Brick. Thomson acquired this pen-name, while writing for a student magazine at the University of Michigan. He never graduated, but was expelled for belonging to a campus secret society.

Thomson had a productive career as a journalist and satirist after failing as both an actor and a traveling salesman. Junius Henri Browne notes that Thomson was a member of the “clever crew” of Bohemians when he was at the height of his popularity. He was married to the daughter of popular author Fanny Fern (Sarah Willis Parton), who also worked as a journalist.

Read more about Doesticks in the Post Scriptum of 'The Witches of New York'.