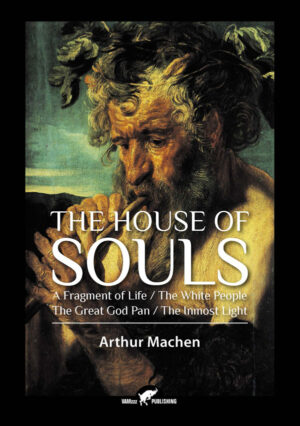 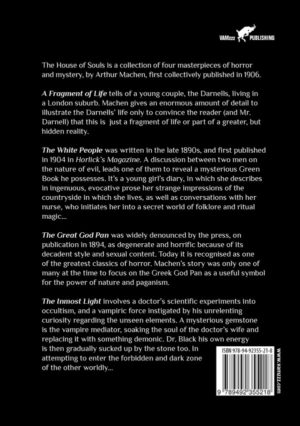 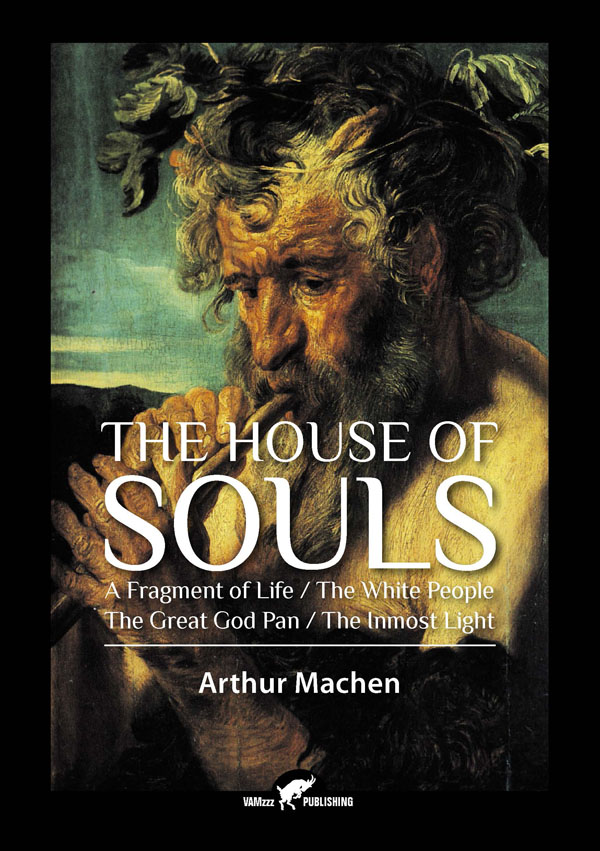 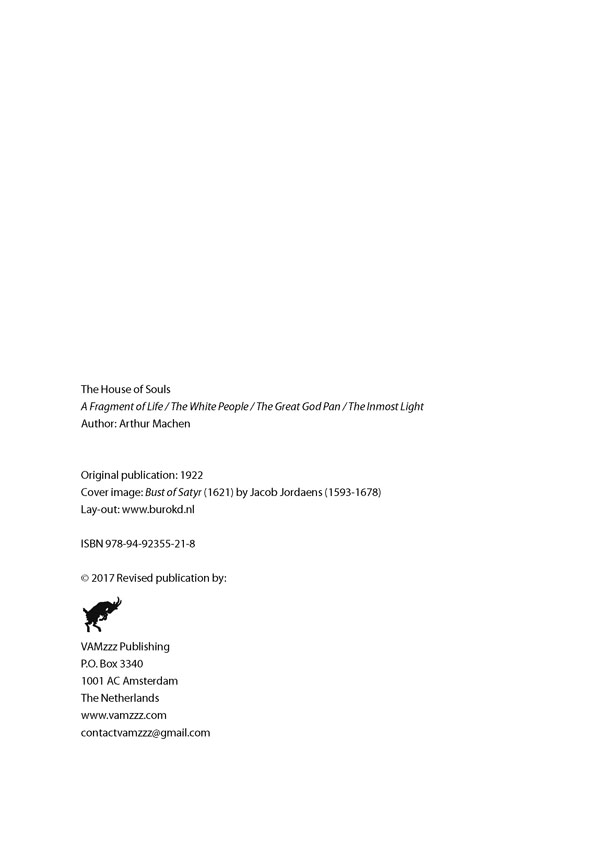 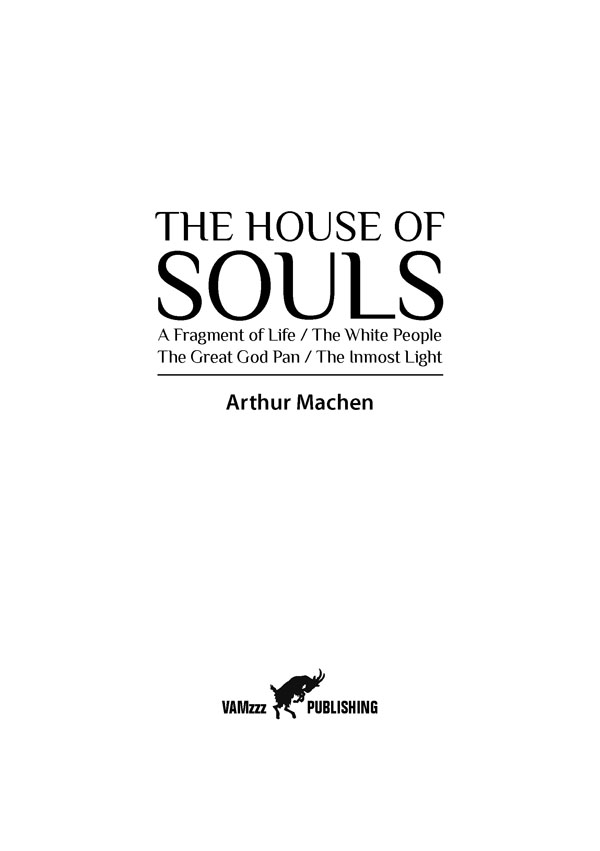 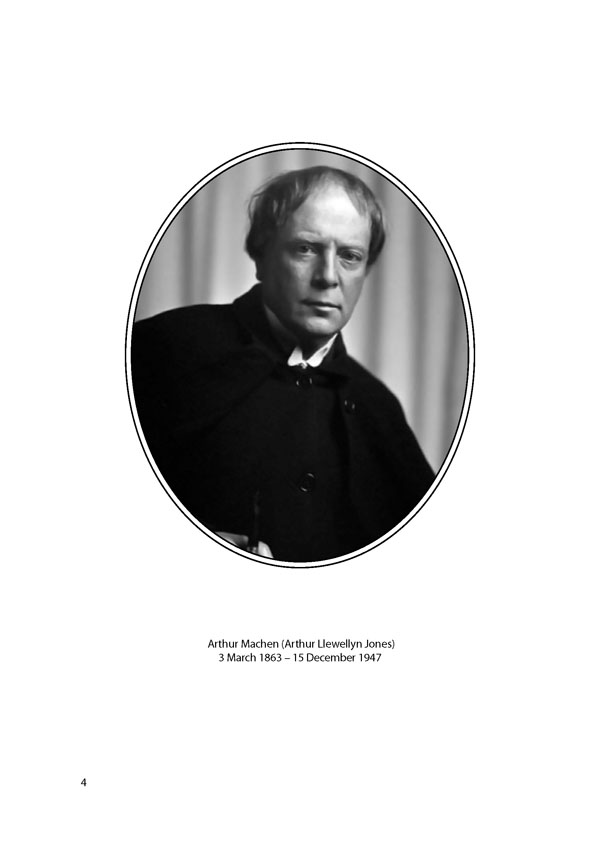 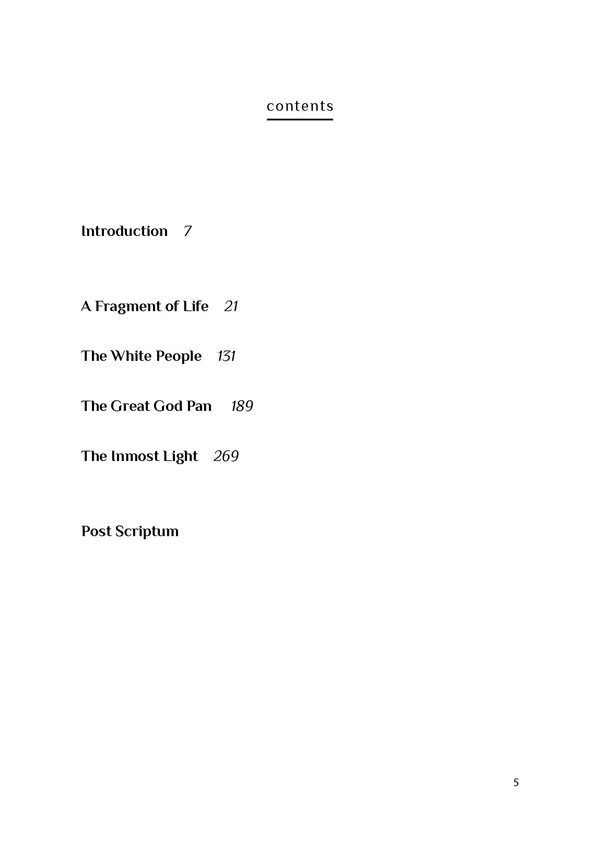 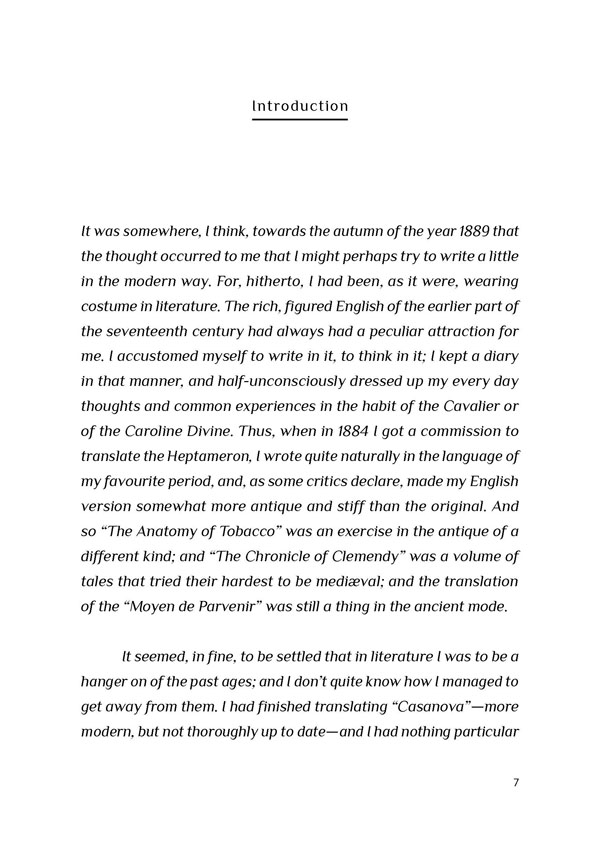 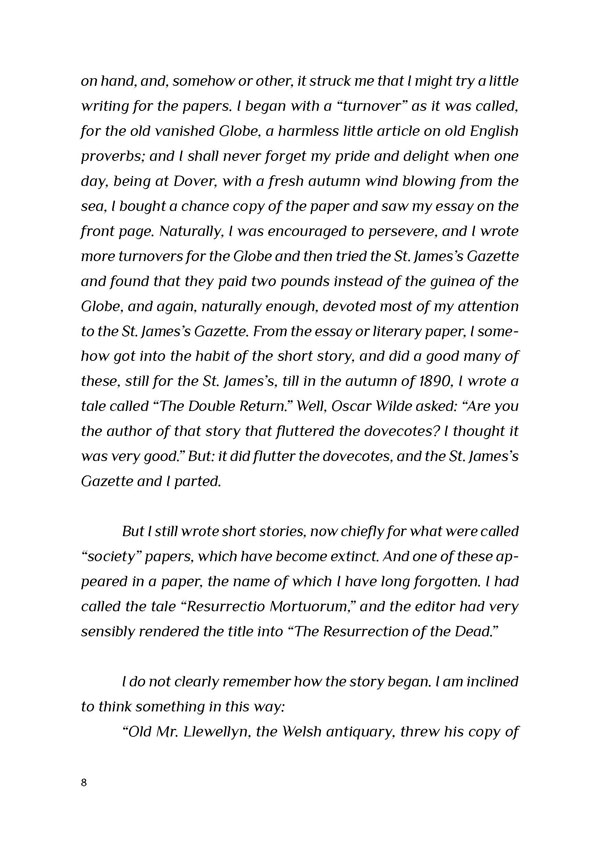 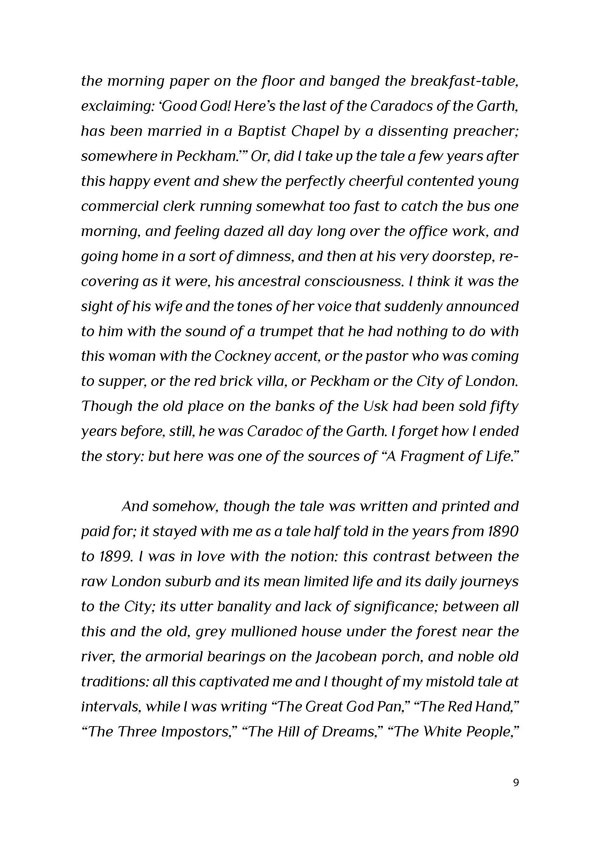 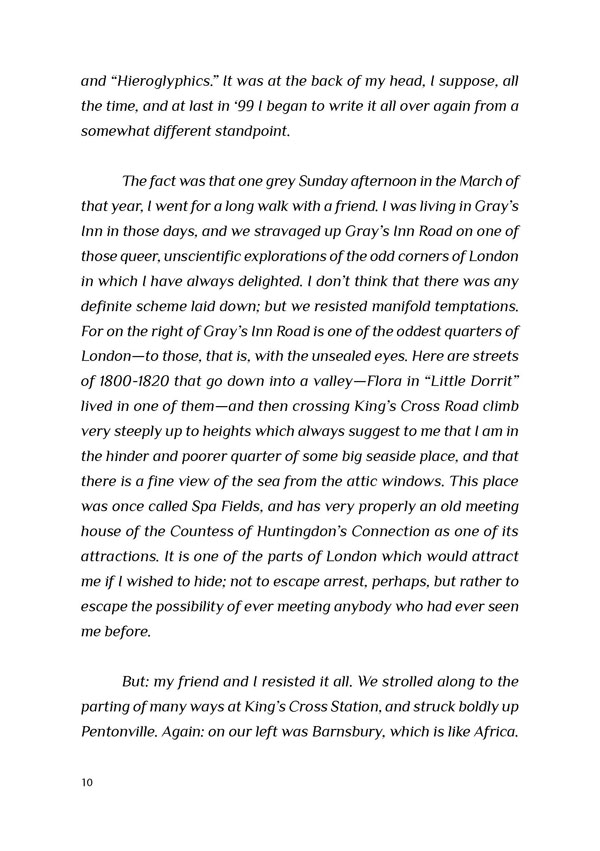 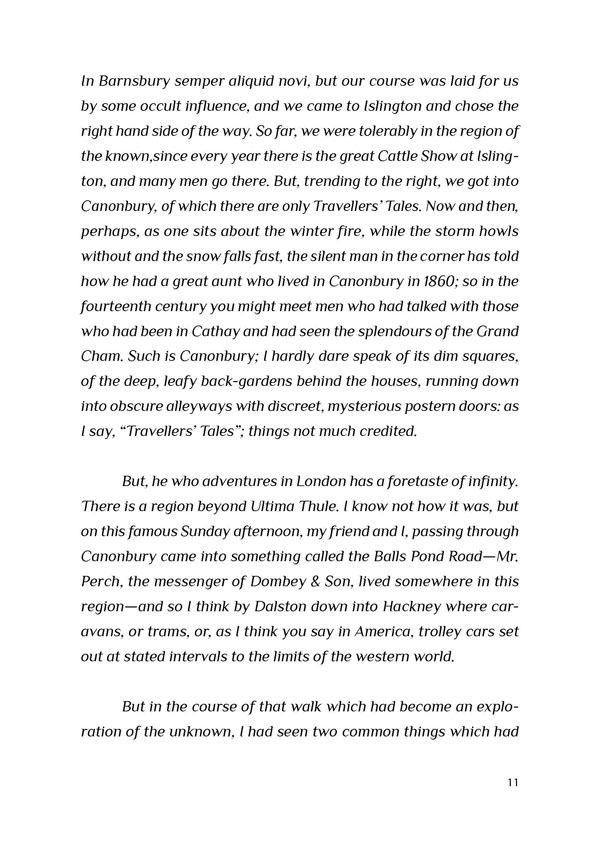 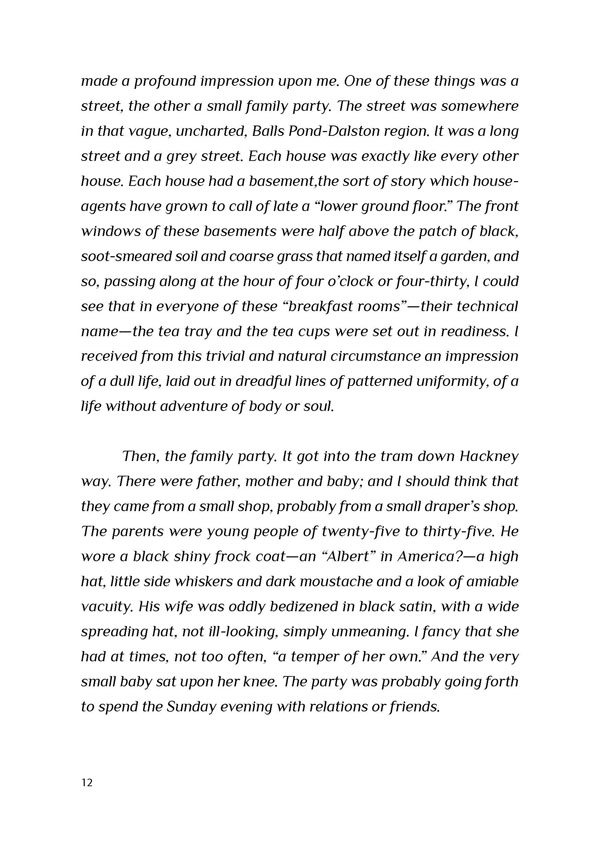 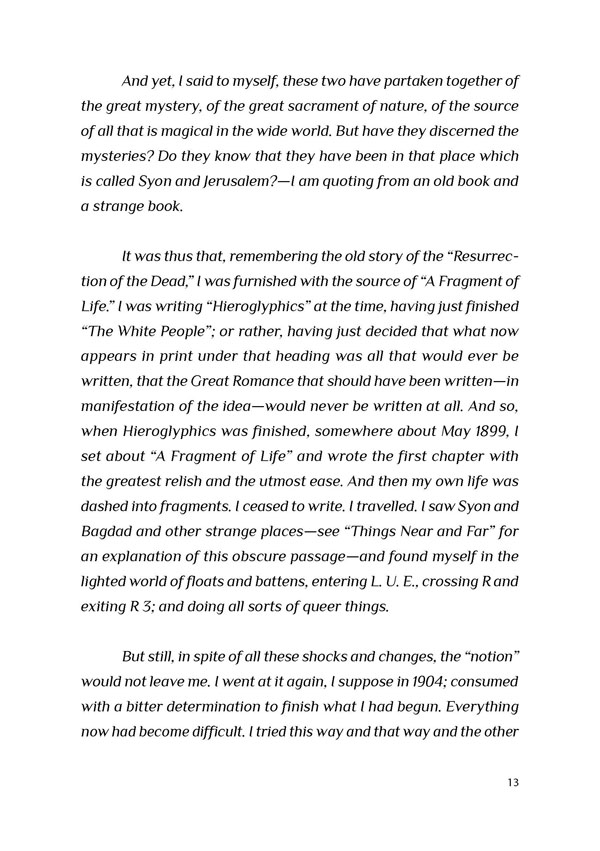 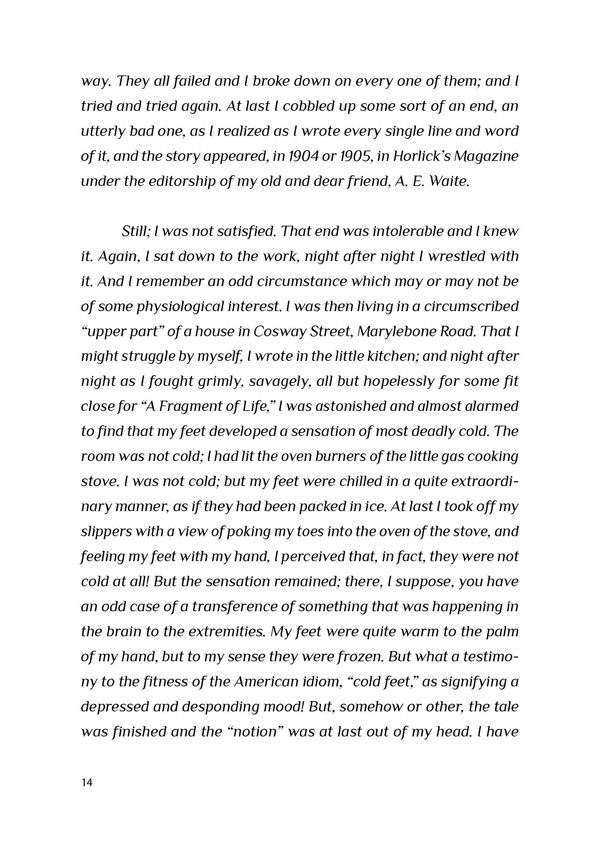 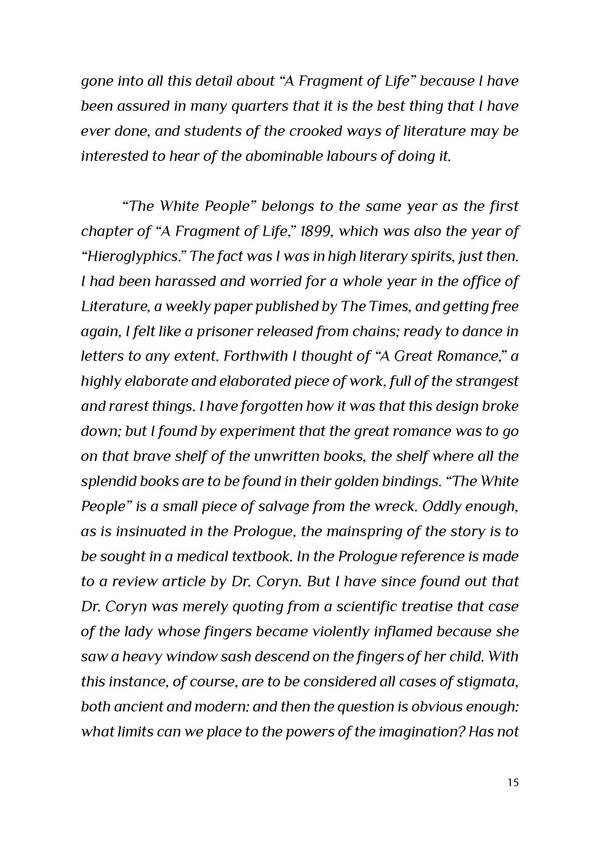 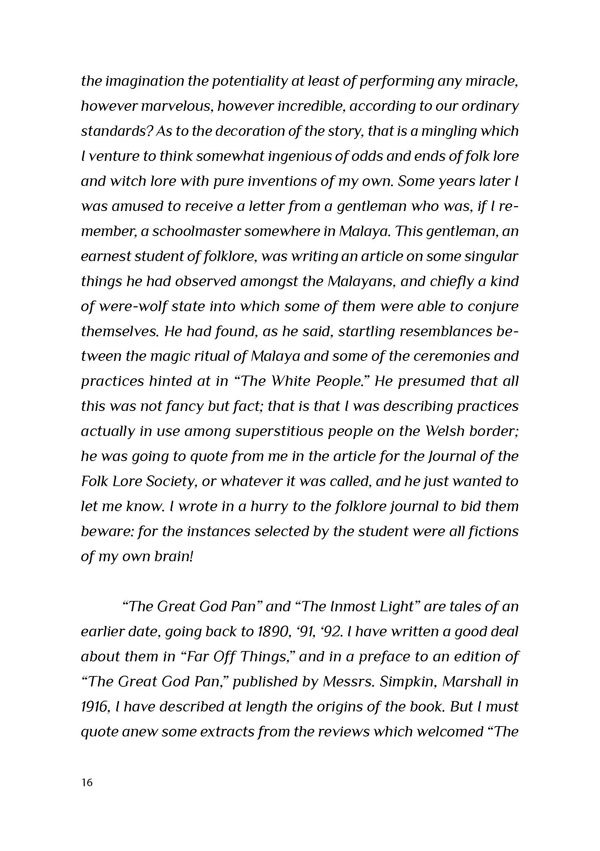 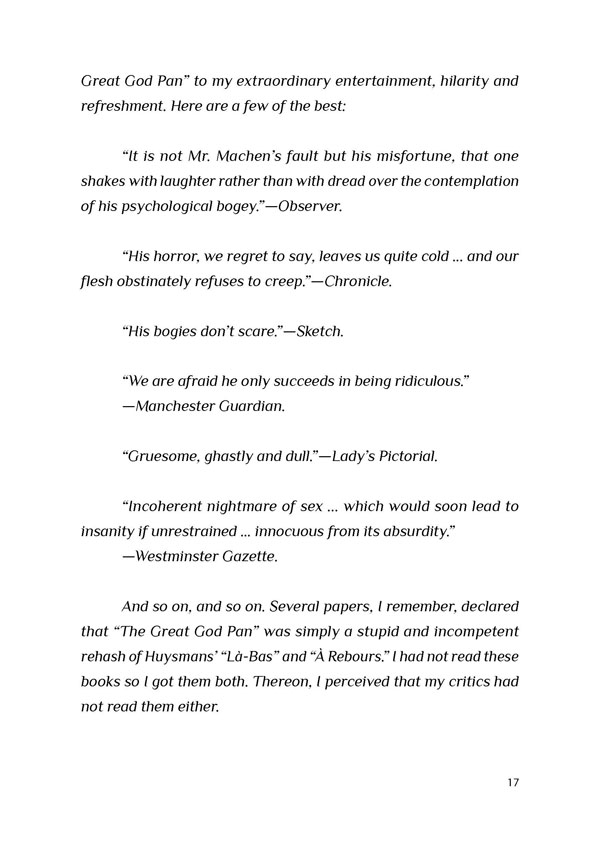 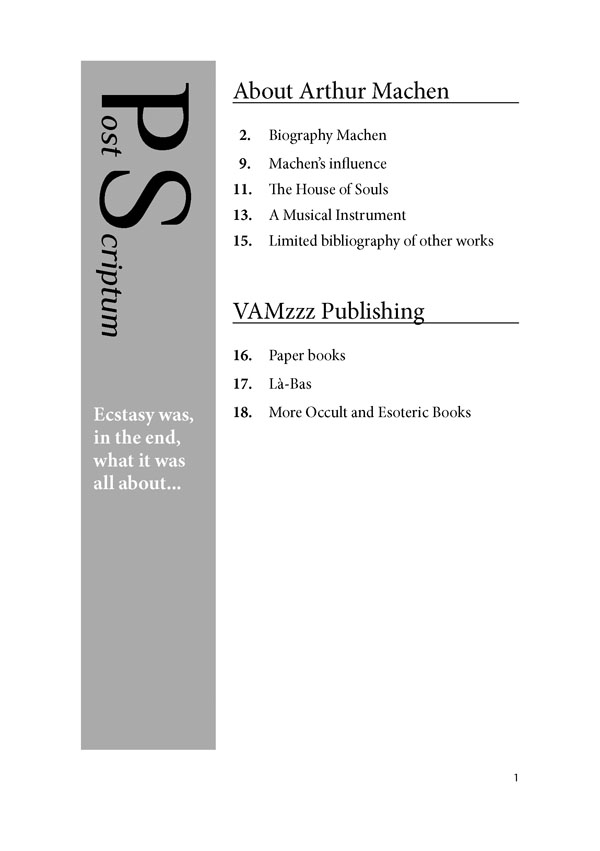 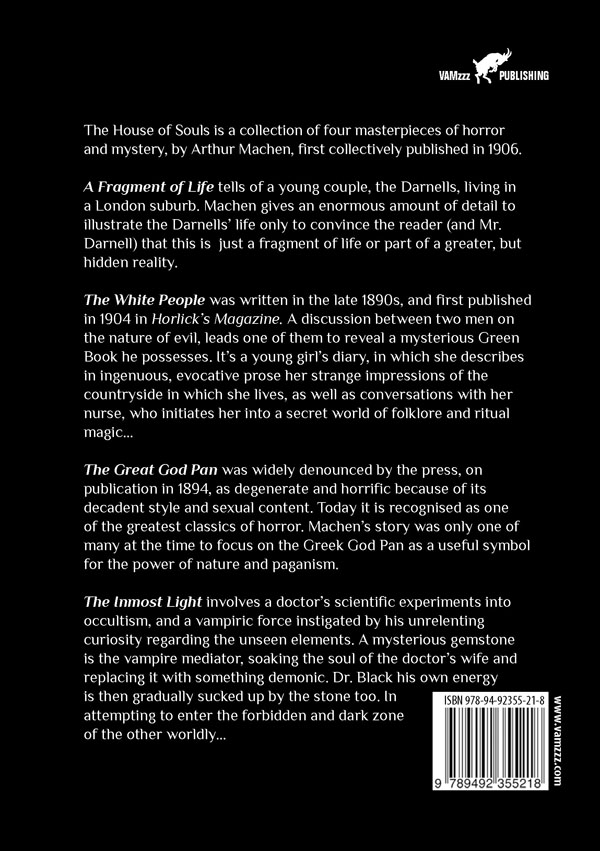 The House of Souls is a collection of four stories: A Fragment of Life, The White People, The Great God Pan and The Inmost Light. These masterpieces of horror and mystery by Arthur Machen were first collectively published in 1906.

Four stories of horror and mystery

The House of Souls is a collection of four masterpieces of horror and mystery, by Arthur Machen, first collectively published in 1906.
A Fragment of Life tells of a young couple, the Darnells, living in a London suburb. Machen gives an enormous amount of detail to illustrate the Darnells’ life only to convince the reader (and Mr. Darnell) that this is just a fragment of life or part of a greater, but hidden reality. The White People was written in the late 1890s, and first published in 1904 in Horlick’s Magazine. A discussion between two men on the nature of evil, leads one of them to reveal a mysterious Green Book he possesses. It’s a young girl’s diary, in which she describes in ingenuous, evocative prose her strange impressions of the countryside in which she lives, as well as conversations with her nurse, who initiates her into a secret world of folklore and ritual magic… The Great God Pan was widely denounced by the press, on publication in 1894, as degenerate and horrific because of its decadent style and sexual content. Today it is recognised as one of the greatest classics of horror. Machen’s story was only one of many at the time to focus on the Greek God Pan as a useful symbol for the power of nature and paganism. The Inmost Light involves a doctor’s scientific experiments into occultism, and a vampiric force instigated by his unrelenting curiosity regarding the unseen elements. A mysterious gemstone is the vampire mediator, soaking the soul of the doctor’s wife and replacing it with something demonic. Dr. Black his own energy is then gradually sucked up by the stone too. In attempting to enter the forbidden and dark zone of the other worldly…

Arthur Machen (3 March 1863 – 15 December 1947) was a Welsh mystic and author of the 1890s and early 20th century. He is best recognized for his influential supernatural, fantasy, and Gothic novels. His novella The Great God Pan (1890/1894) won a reputation as one of the most important classics of horror. Perhaps the most important, if you ask Stephen King: ‘Not Lovecraft; it’s a riff on Arthur Machen’s The Great God Pan, which is one of the best horror stories ever written. Maybe the best in the English language..’

Machen was born Arthur Llewelyn Jones in Caerleon on Usk, in the county of Gwent, South Wales and descended from a long line of clergymen. In 1864, when Machen was two, his father John Edward Jones was an Anglican priest, who became the vicar of the parish of Llanddewi Fach with Llandegveth, about five miles north of Caerleon. Machen was brought up at the rectory there. Jones had adopted his wife's maiden name, Machen, to inherit a legacy, legally becoming "Jones-Machen"; his son was baptised under that name and later used a shortened version of his full name, Arthur Machen, as a pen name.

Machen was a pioneer in psychogeography, due to his interest in the interconnection between landscape and the mind. His strange wanderings in Wales and London recorded in his beautiful prose make him of great interest to writers on this subject. As a child Machen sucked in the atmospheres of the Welsh landscapes, surrounding his place of birth. Though he returned only rarely to Gwent in later life, his work continually evoked its darker landscapes. Machen was impressed too, by the findings of local archaeologists, who in the 1870s were digging up strange pagan sculptures and inscribed stones dating from the Roman occupation of the region. The Romano-British god Nodens, whose temple was excavated at nearby Lydney Park in his boyhood, turns up in some of his most memorable horror fiction.

Read more about Arthur Machen in the Post Scriptum of The House of Souls.

Due to this special period, delivery times are taking slightly longer than normal. Thank you for your patience and support at this time. Dismiss