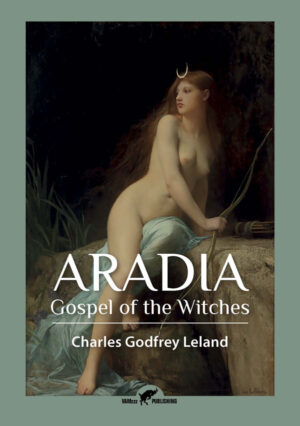 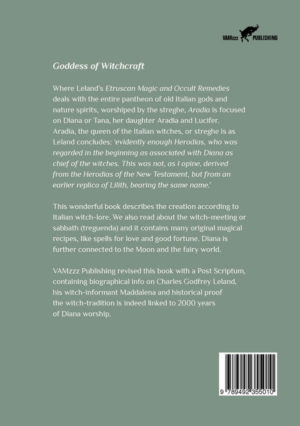 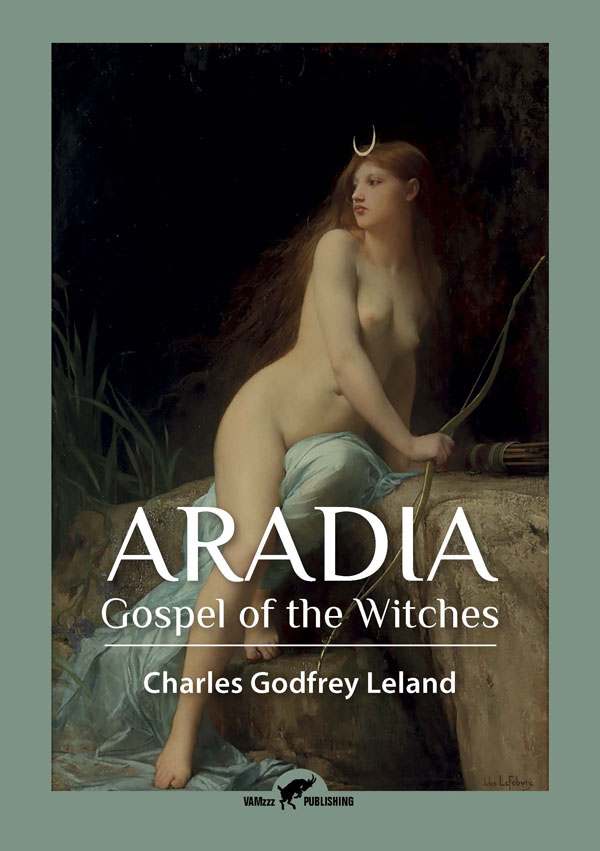 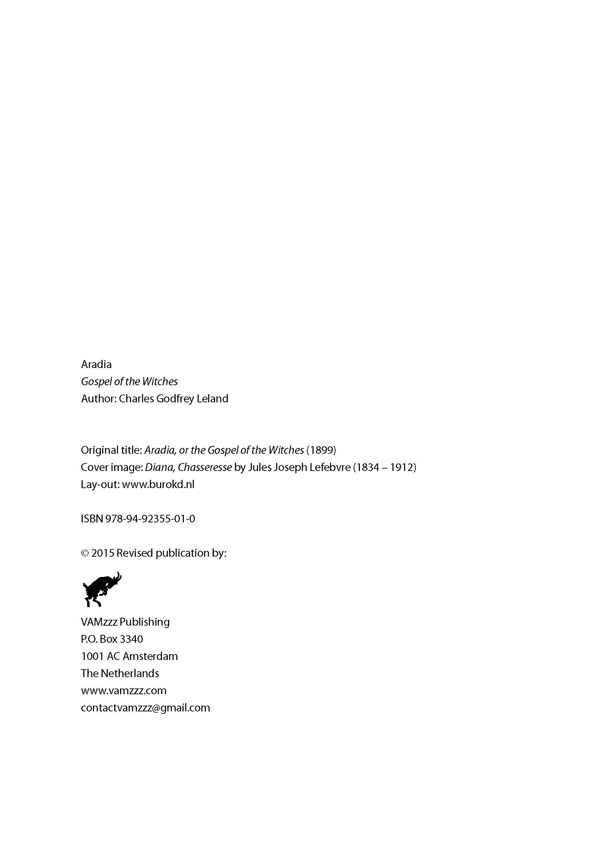 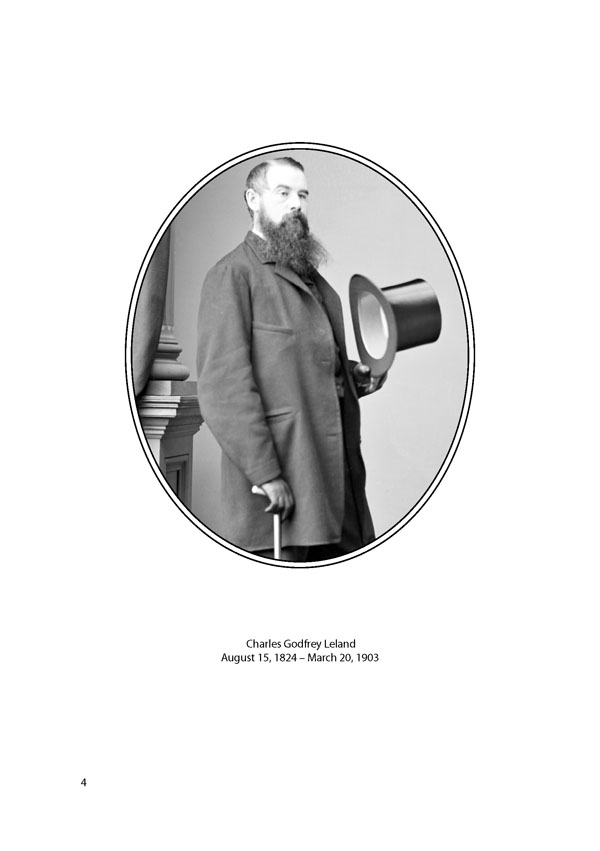 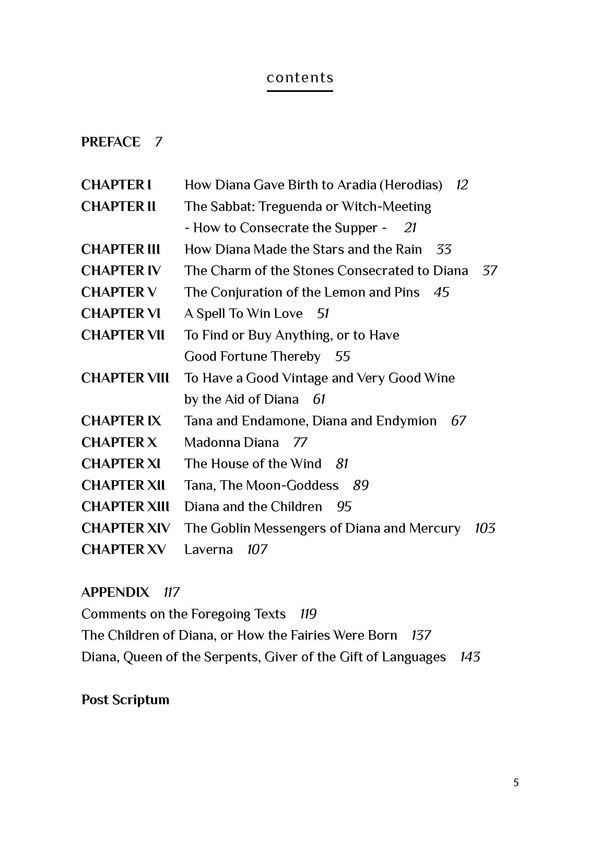 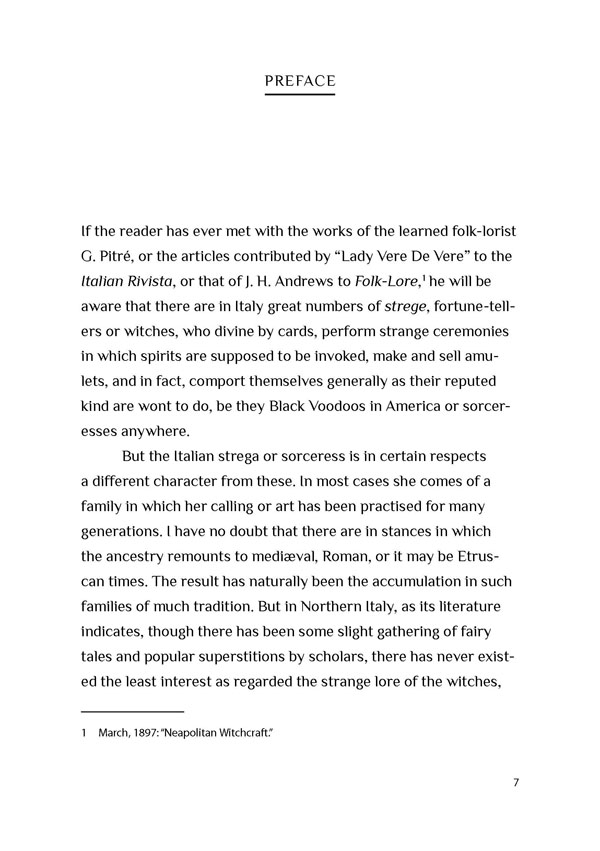 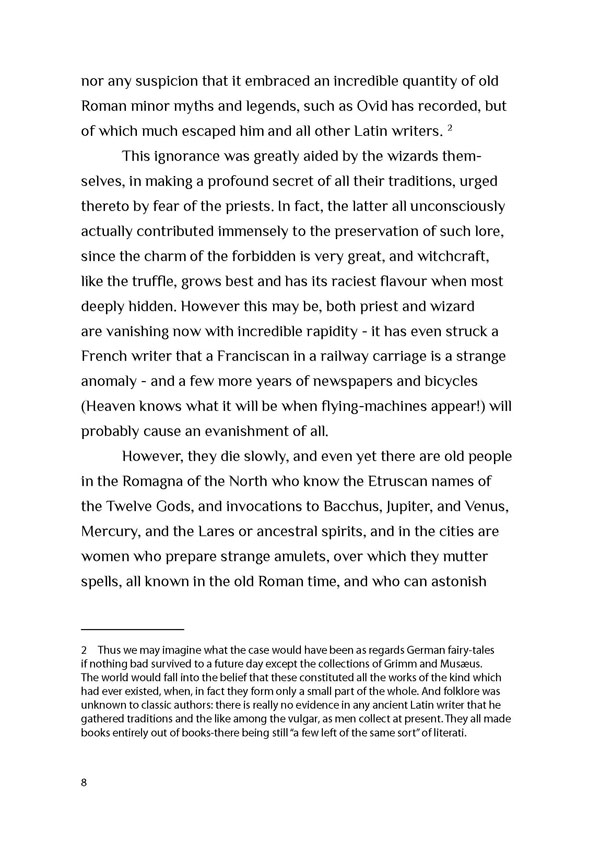 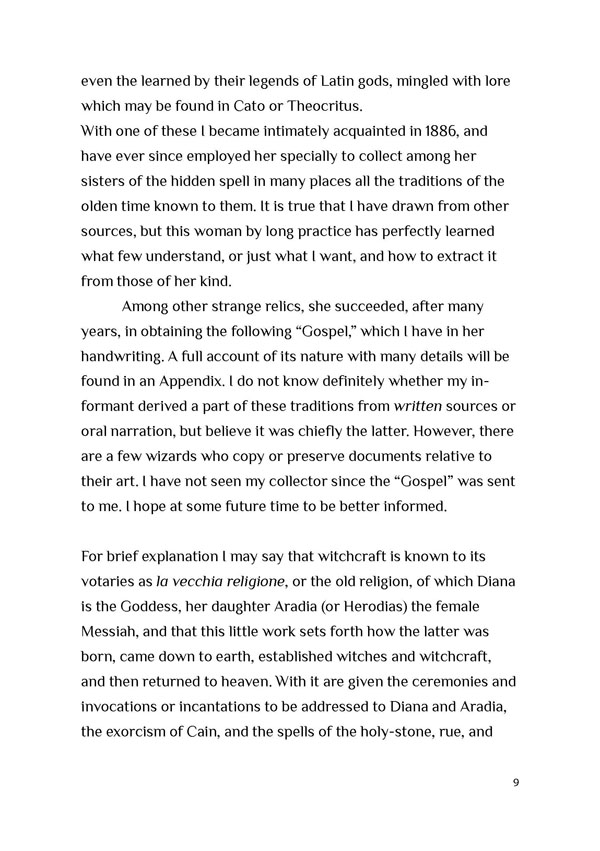 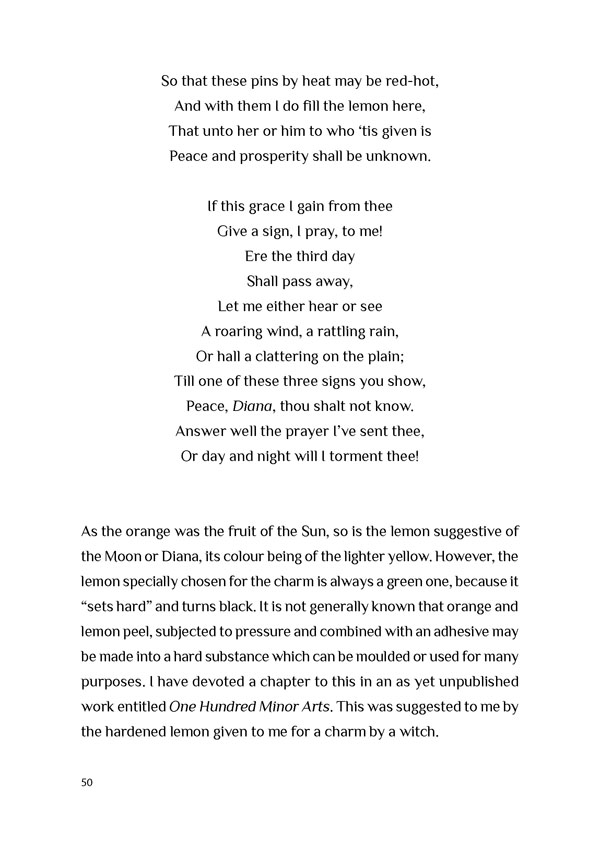 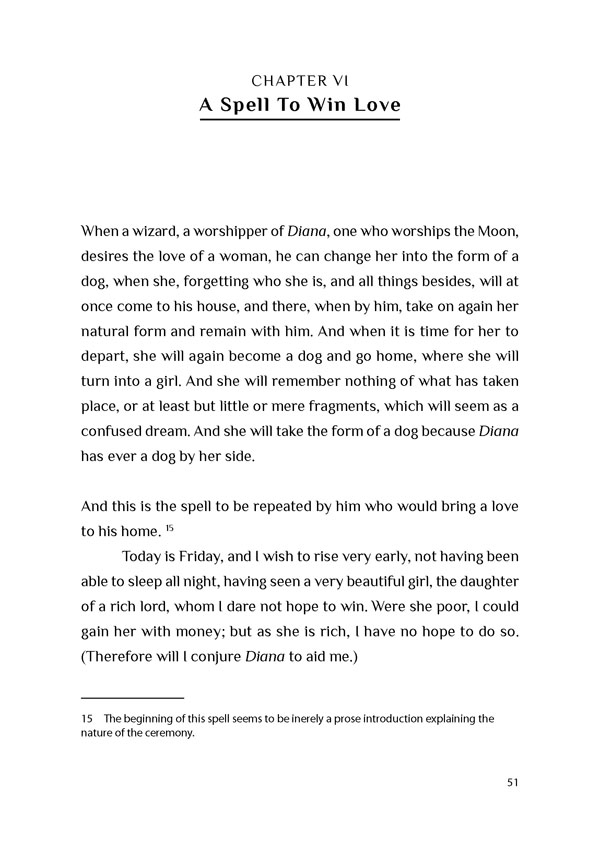 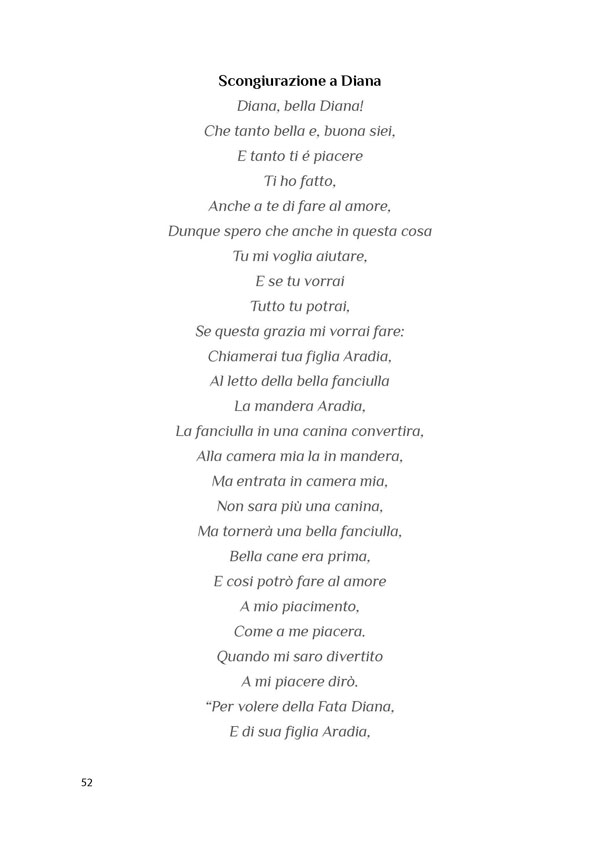 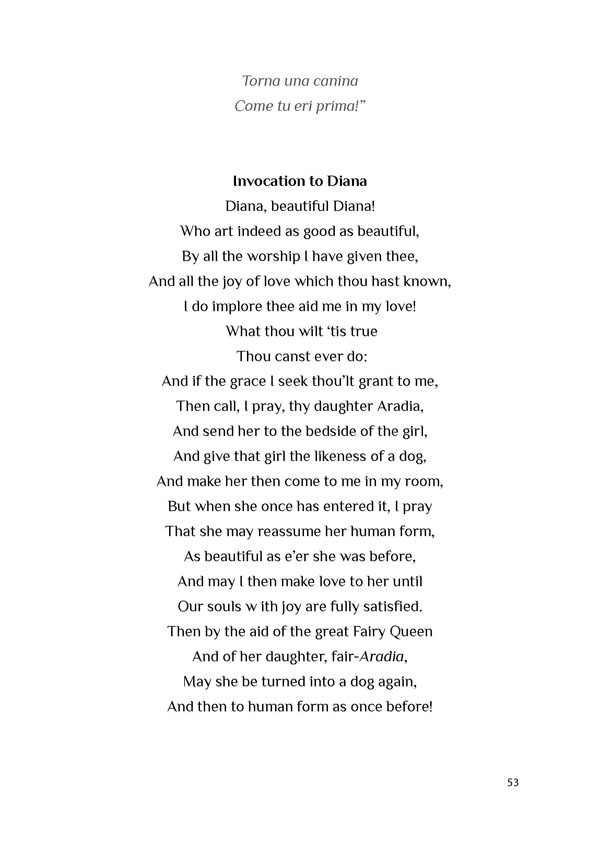 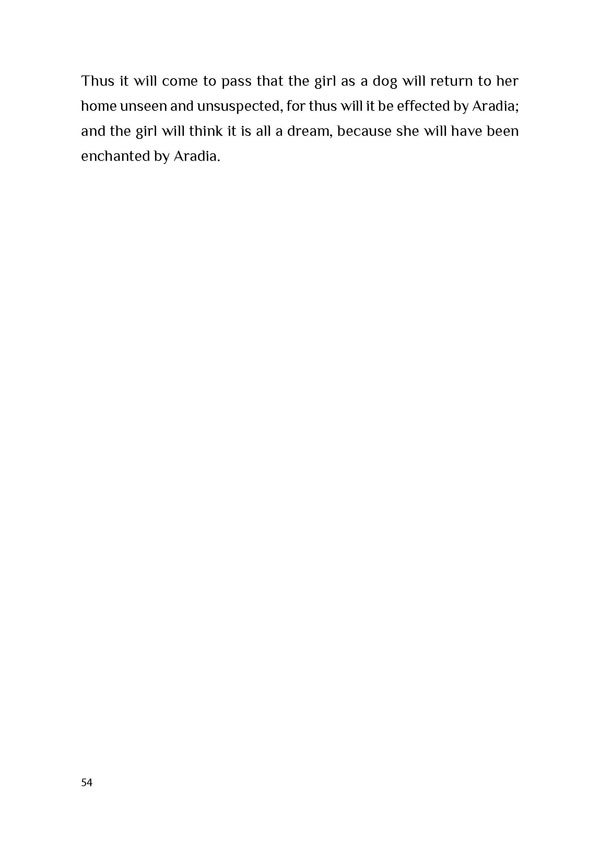 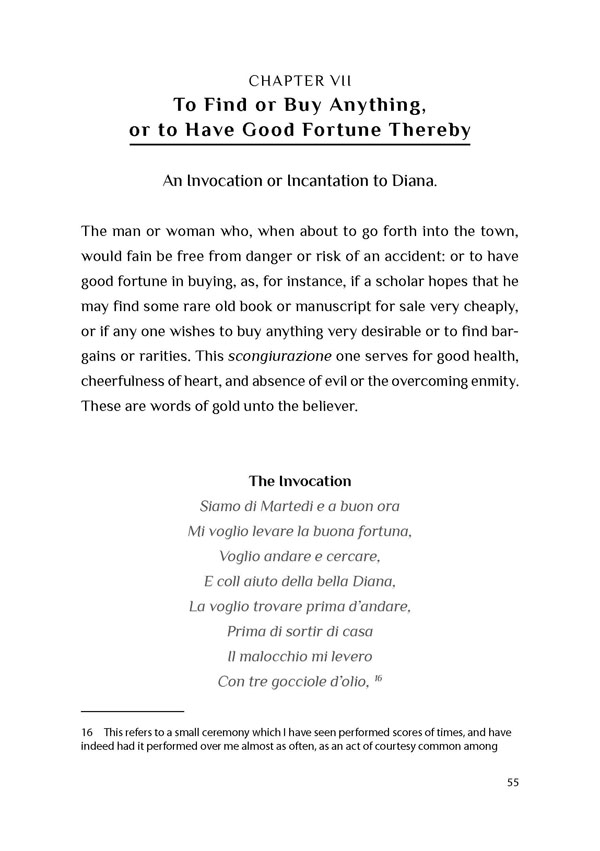 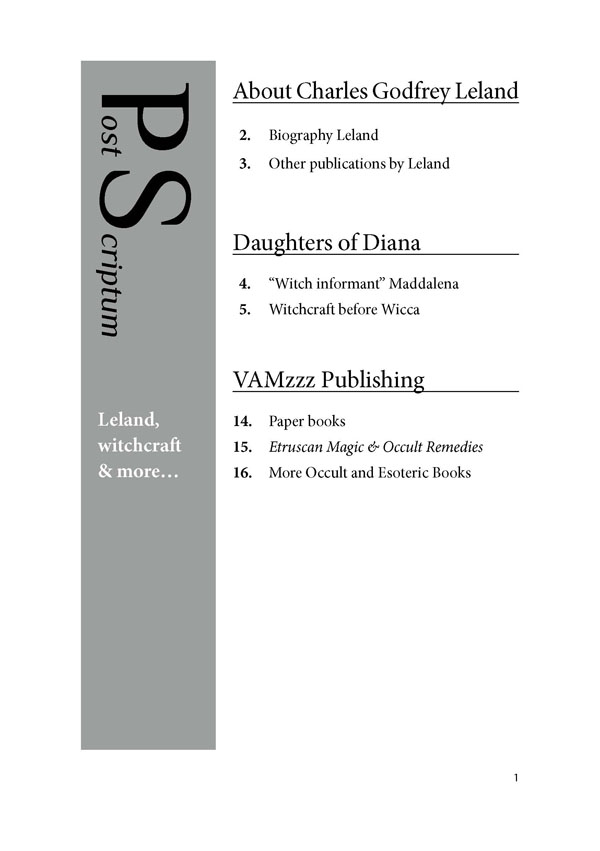 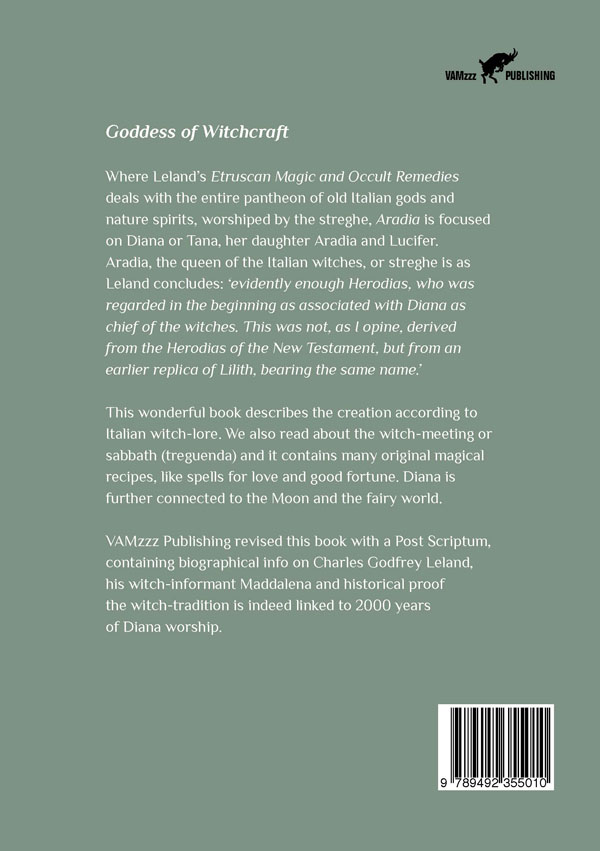 Aradia is focused on Diana or Tana, her daughter Aradia and Lucifer. This wonderful book describes the creation according to Italian witch-lore. We also read about the witch-meeting or sabbath (treguenda) and it contains many original magical recipes, like spells for love and good fortune. Diana is further connected to the Moon and the fairy world.

Gospel of the Witches

Where Leland’s Etruscan Magic and Occult Remedies deals with the entire pantheon of old Italian gods and nature spirits, worshiped by the streghe, Aradia is focused on Diana or Tana, her daughter Aradia and Lucifer. Aradia, the queen of the Italian witches, or streghe is as Leland concludes: ‘evidently enough Herodias, who was regarded in the beginning as associated with Diana as chief of the witches. This was not, as I opine, derived from the Herodias of the New Testament, but from an earlier replica of Lilith, bearing the same name.’

This wonderful book describes the creation according to Italian witch-lore. We also read about the witch-meeting or sabbath (treguenda) and it contains many original magical recipes, like spells for love and good fortune. Diana is further connected to the Moon and the fairy world.

Charles Godfrey Leland (August 15, 1824 – March 20, 1903) was an American folklorist, born in Philadelphia, Pennsylvania. Leland told the story that shortly after his birth, his old Dutch nanny took him to the family attic and performed a ritual, involving a Bible, a key, a knife, lighted candles, money and salt to ensure a long life as a “scholar and a wizard”. The family being prosperous, employed several servants. One of them was an Irish immigrant by whom he learned about ghosts, witches and fairies. There was also a black servant, working in the kitchen who introduced him into Voodoo. His mother often referred to an ancestress that had married into “sorcery”. Anecdotes his biographers have commented upon as foreshadowing his passionate interest in folk traditions and the magical.

Leland wrote several classic books on Gypsies and Italian Witches. These include: Legends of Florence Collected from the People (two volumes), Etruscan Roman Remains in Popular Tradition and The Gypsies and Gypsy Sorcery. His book Aradia - Gospel of the Witches became one of the most influential works to affect and influence modern witchcraft, Wicca and paganism. Both Gardner and Doreen Valiente were deeply inspired by Leland.