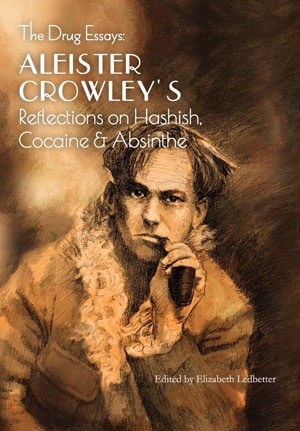 The essays in this collection represent Aleister Crowley’s ideas and meditations on drugs. Part One explores Crowley’s experiences with hashish and its uses in mystical rituals. Part Two examines cocaine and looks at whether it should be regulated by law. Finally, Part Three delves into the sensuality of absinthe and its role in society.

The essays in this collection represent Aleister Crowley’s ideas and meditations on drugs. Part One explores Crowley’s experiences with hashish and its uses in mystical rituals. Part Two examines cocaine and looks at whether it should be regulated by law. Finally, Part Three delves into the sensuality of absinthe and its role in society. The essays are fascinating, both for what they reveal about Crowley’s views on drugs, and for the way they tap into some of the occultist’s chief preoccupations: the quest for transcendence and the marriage of science to mysticism.

By his own account, Crowley was interested in drugs because he wanted to return to what he called the “pure soul” of the universe. He presents himself as a scientist, studying drugs for their ability to expand human awareness. He believed that hashish, in particular, was an ideal tool for putting man in touch with a deeper truth and consciousness. “Hashish at least gives proof of a new order of consciousness, and (it seems to me) it is this prima facie case that mystics have always needed to make out, and never have made out,” he wrote.

Hashish opened the door to mystical experiences, but Crowley insisted the drug was nothing but a tool–it was never to be used as an end. “I have no use for hashish save as a preliminary demonstration that there exists another world attainable – somehow,” Crowley insisted. Crowley takes a similar view of cocaine. Using cocaine causes intense joy, he wrote; just one snort can make a man feel that he is being transformed from a “grub” to a “butterfly.” But like any drug, cocaine is just a tool which can help people break out of their terrestrial lives and catch glimpses of the divine: “The happiness of cocaine is not passive or placid as that of beasts; it is self-conscious. It tells man what he is, and what he might be; it offers him the semblance of divinity, only that he may know himself a worm.”

The end-goal of drugs, in Crowley’s view, is to expand man’s horizons. Crowley presents himself as an experimenter, engaged in studying the possible uses of drugs. However, most modern readers will find it hard to swallow the idea of Crowley as a pure researcher. It would certainly be a mistake to take these essays entirely at face value, as the purely scientific and objective texts which Crowley in-tended them to be. But that, of course, doesn’t mean that they lack literary value.

Crowley wrote that intoxication–whether from wine, drugs, or art–was what made it possible for man to rise above his “grub” life and achieve transcendence. He said it well here: “The surplus of Will must find issue in the elevation of the individual towards the Godhead; and the method of such elevation is by religion, love, and art. These three things are indissolubly bound up with wine, for they are species of intoxication.”

Those lines come from Crowley’s essay about absinthe, which is by far the most rhapsodic in this collection. Crowley makes no bones about his adoration for the liquor. He gets downright poetic about the drink’s “opalescent” appearance and about the “rapture” it provokes. “Absinthe” is perceived as pure beauty, liberation from the grayness of the day-to-day.

Perhaps that’s the gift that these essays can give us. Perhaps, rather than examining them too closely for truth and accuracy, it would be wise to read the essays in this book as objects of beauty. They are not cold, hard, facts. They are ideas, as opalescent as the absinthe in Crowley’s glass. They read best when we can set aside our doubts and give ourselves up to the enjoyment of what this eccentric man was able to produce.

A History of Magic, Witchcraft, and the Occult