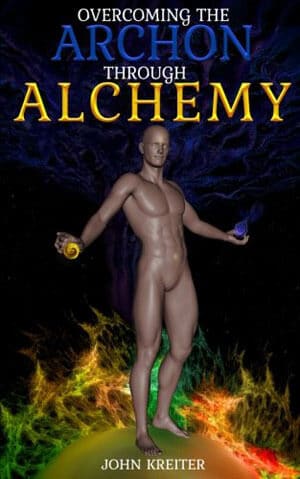 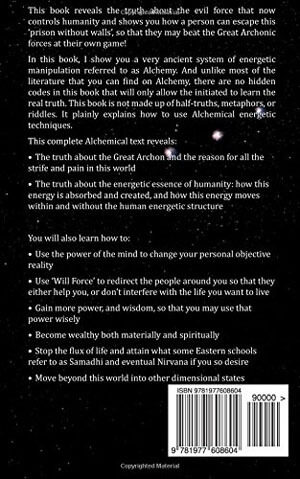 Overcoming the Archon Through Alchemy 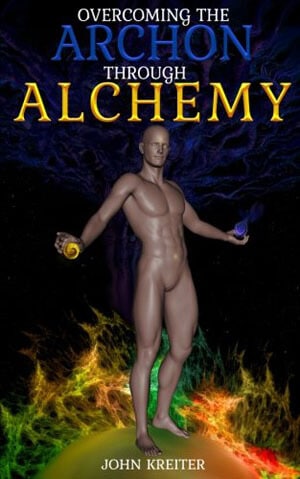 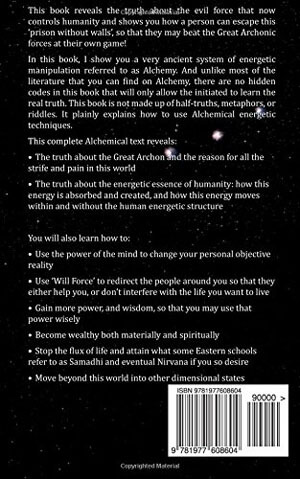 Overcoming the Archon Through Alchemy

“In this book, I show you a very ancient system of energetic manipulation referred to as Alchemy. And unlike most of the literature that you can find on Alchemy, there are no hidden codes in this book that will only allow the initiated to learn the real truth. This book is not made up of half-truths, metaphors, or riddles. It plainly explains how to use Alchemical energetic techniques.” – Kreiter

Almost every person on Earth is born and dies as a slave. People are born into this world and soon after become indoctrinated into a system designed to take as much energy as possible from them, until the day comes when they finally lose all their energy and die; an awareness bubble is created by the churning sea, moves a little within this sea, and is destroyed by that same pressure that will create another awareness bubble somewhere else. Throughout this small journey from one point in the Dark Sea to another, almost every single thought that this self-aware energetic bubble will have, won’t be its own. It will be an implant, an imposed thought created by a foreign power that gives with one hand and takes double with the other. This life is our challenge, the place where the self-aware human bubble can perfect its energetic control. If it can perfect its ability to manipulate energy well enough, it has a chance to wrestle its individuality away from the Alien Trap and take this individuality on journeys beyond all current conceivable possibility.

Many write about humanity’s strange history and the dark powers that have a controlling interest in its fate. BUT few writers and investigators ever show you how to really escape this trap. They tell you what is going on, but they really don’t have a good answer when they are finally asked how to beat this evil force. This book changes that! It clearly shows you how a human being can escape this ‘prison without walls’, so that they may beat the Great Archonic forces at their own game!

In this book, I show you a very ancient system of energetic manipulation referred to as Alchemy. And unlike most of the literature that you can find on Alchemy, there are no hidden codes in this book that will only allow the initiated to learn the real truth. This book is not made up of half-truths, metaphors, or riddles. It plainly explains how to use Alchemical energetic techniques. In that sense, it could be said that this book is about uncovering the truth, and using the knowledge gained to beat a system that is designed to take more from you than you could ever get back from it. This book tells the truth without compromise!

The techniques and the information provided should allow you to do what many talk about wanting to do, or claim to do, but that don’t seem to have a coherent and structured outline for; which makes doing what they advocate very difficult.
It is my hope that this book will provide a logical framework and a step by step procedural system for ALCHEMY. But why Alchemy? What is so special about this supposedly flawed attempt at chemistry? Alchemy is the most misunderstood body of knowledge there is, and the reason for this, as I will make apparent in this book, is directly related to the reasoning mind that now rules human perception. Alchemy is the beginning and the end (the Alpha and Omega) of all occult knowledge, and it represents in my opinion, the best (and perhaps only) way to both attain power and escape the predatory forces that now stand above humanity.”

It will also provide ways to:

I've always believed in the power of the mind. As a child I remember that I could always make myself sick on command if I had to, whatever it took to get out of school. I would usually have dream déjà vu and I would never cease to be amazed by the fact that something in my dreams would later become part of my objective reality. I constantly saw amazing things, some things that scared the daylights out of me, and I was blessed by the fact that I lived with my great-grandmother who seemed to be able to play with reality like some kids play with toys. At the time I did not feel so blessed to be around my great grandmother, and her antics scared me to death, but now in retrospect I find it amazing that others have never seen what I have seen and even doubt that such things exist.

Life has an inner reality, I explore that realm. I believe that thought created reality instead of the other way around. What I have discovered, I try to share.

The Elements of Spellcrafting