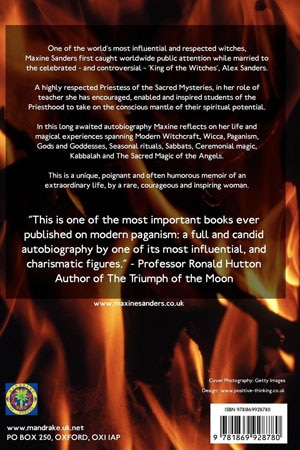 One of the world’s most influential and respected witches, Maxine first caught worldwide public attention while married to the celebrated – and controversial – ‘King of the Witches’, Alex Sanders. A highly respected Priestess of the Sacred Mysteries, in her role of teacher she has encouraged, enabled and inspired students of the Priesthood to take on the conscious mantle of their spiritual potential. This is a unique, poignant and often humorous memoir of an extraordinary life, by a rare, courageous and inspiring woman.

One of the world’s most influential and respected witches, Maxine first caught worldwide public attention while married to the celebrated – and controversial – ‘King of the Witches’, Alex Sanders. A highly respected Priestess of the Sacred Mysteries, in her role of teacher she has encouraged, enabled and inspired students of the Priesthood to take on the conscious mantle of their spiritual potential.

In this long awaited autobiography Maxine reflects on her life and magical experiences spanning Modern Witchcraft, Wicca, Paganism, Gods and Goddesses, Seasonal rituals, Sabbats, Ceremonial magic, Cabbala and The Sacred Magic of the Angels. This is a unique, poignant and often humorous memoir of an extraordinary life, by a rare, courageous and inspiring woman.

Maxine Sanders (born Arline Maxine Morris on 30 December 1946 in Cheshire) is a key figure in the development of modern pagan witchcraft and Wicca and, along with her late husband, Alex Sanders, the co-founder of Alexandrian Wicca.

Raised a Roman Catholic, Maxine was educated at St. Joseph's Convent School in Manchester. In 1964, whilst a student at Loreburn Secretarial College, she first met Alex Sanders. They met through his friendship with her mother who had a range of esoteric interests but their accounts of her introduction to witchcraft vary. Alex's memoir describes her as "shy and inexperienced," with her potential being awoken only through her contact with him. Maxine's memoir gives a very different account, describing her experiences of witchcraft as already having been initiated at the age of 15 into a magical lodge in rituals performed in Alderley Edge, Cheshire, England. By the following year, she and at least one other person had been initiated and the coven was up and running. Maxine was quickly taken through the system of three degrees and by the age of 18 was a third degree Witch Queen although one source suggests that at that time her role was a somewhat passive one. It was said that at Alex's lectures all Maxine had to do was to "sit there in her finery." It is alleged that Alex said, "All I want you to do is sit there and look beautiful and represent the Goddess."

Maxine's early career as a witch was not free from difficulties. In 1965, a midsummer ritual was attended by a newspaper photographer, unbeknown to some of those present, Maxine included. The subsequent report in a local newspaper published recognisable photographs of her and she was thus "outed" as a witch without her permission. Maxine's unconventional spiritual path led to strife with her mother, who she was reconciled with close before her death. Soon after Maxine's mother's death members of her mother's neighborhood chased Maxine, throwing stones, and the windows of the house which had been her mother's were smashed.

Maxine and Alex were handfasted at Alderley Edge in 1965 and continued to initiate new witches in Manchester. In 1967, they moved to London where they lived and practised witchcraft in a basement flat in Notting Hill Gate, attracting much publicity and initiating many would-be priests and priestesses. At Beltane 1968, the couple married in a civil ceremony in Kensington London. Alex and Maxine had two children: Maya, born in 1967, and Victor, born in 1972.

Over the next few years until 1972, Maxine and Alex trained and initiated new members of their coven, initially within a framework consistent with older traditions but subsequently incorporating more of the couple's own unique characteristics, preferences, and innovations. In 1971, Stewart Farrar, recently initiated by Maxine, gave their brand of witchcraft the new name of "Alexandrian", partly honouring its leaders and also referencing the greatest city of the Hellenistic world and the library of magical texts which it housed, the library of Alexandria.

In 1971, Alex and Maxine had acquired a second home outside of London in the village of Selmeston, Sussex. There Maxine became a "fanatical gardener" while she and Alex set up a second coven and started to train people locally. Maxine, however, became concerned that the standards and expectations of training were not so high as they once had been in London, and that there was an awkward atmosphere. The couple found the cost of running two homes was too much, and they returned to London in 1972. Maxine declared that she no longer wanted to bear the responsibilities that came with the title "Witch Queen" and ritually destroyed the ritual robes and other items she had acquired. Shortly thereafter, Alex moved back to Sussex, and Maxine remained in London with their children.

From early 1970 onwards, both Alex and Maxine gained media attention due to their openness about practising witchcraft, appearing in a number of films, such as 'Legend of the Witches' (1970), 'Witchcraft ’70' (1970), 'Secret Rites' (1971), and numerous documentaries.

Maxine remained in close contact with Alex until his death in 1988 and shortly before his death, he named Maxine as his next of kin.

In 2000, Maxine moved to Snowdonia, Wales, until 2010, but returned to Abbey Road, London. Today, Maxine teaches in the Coven of the Stag King in London, which holds monthly soirées. She continues to travel, giving talks to those interested in witchcraft.

Witchcraft and Magic in Ireland

Witchcraft and Demonology in South-West England, 1640-1789

Emotions in the History of Witchcraft

The Trial of Woman